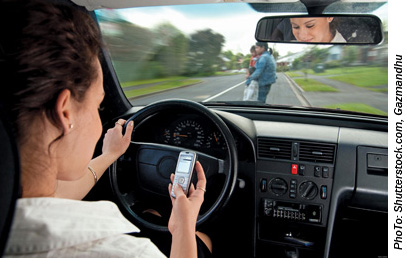 Paying attention while driving is the number one way to avoid distracted driving accidents. Distracted driving can involve a variety of actions. From using a cell phone to texting to eating while driving, all of these things can be considered to cause a distraction. Even just talking while behind the wheel to dealing with noisy kids in the backseat can take your attention off of the road.

Using a hands-free device does not offer much of a difference, although the perception is that it is a good solution. When your attention is elsewhere, some studies show you look, but do not see. In a study conducted by an insurance firm. Even voice-controlled systems take your attention away from the road. Just hearing the notification of an incoming text or email can divert attention at a critical time.

Here are some of the more common reasons why you may get distracted:

Use of A Mobile Phone

This is still by far the most common reason for a driver to be distracted, whether they are using the phone of just seeing who is calling/reading a text.

The authorities are now clamping down on people who eat while they drive, arguing (quite rightly) that they cannot be in full control of the vehicle.

we have all done it, reached down to change the radio station and taken our eyes off the road for a split second, but that is all that it takes.

Retrieving Something from The Back Seat or Floor

Many people have been caught outreaching into the back seat of their car or bending down to pick something off the floor.

while this is not as common occurrence as it once was, many drivers can be easily distracted while lighting up a cigarette.

A simple conversation with a passenger – these have been the reason for many serious incidents, and are so simple to avoid. You should never distract a driver while the vehicle is in motion.

Surprisingly there have been many accidents which have occurred due to a driver’s attention being distracted for a split second by a billboard.

Checking Out an Accident

As mad as it seems, the sight of an accident on the other side of the road/motorway has often resulted in some mass pileups as other drivers stretch their necks to see what is happening.

Waving to pedestrians on the side of the road has often been the cause of many accidents whether it be family friends or someone you like the look of.

Even though you can probably relate to some of the reasons why drivers become distracted, there are some which are plain crazy such as attempting to shave or apply makeup while driving.